In meditation one picks an anchor – a particular sense object to return to again and again. One trains on the faculty of sounds, vision, or sensations. It is crucial to pick one and stick with it for as long as possible. A timer is set for 10 minutes.

We then note when we have become lost in thought. Every time language or visual projections of thought arise, this is noted. I press a button to log every time I catch myself having a thought process. Then I return to the pure object of attention, e.g., sight. By the end of ten minutes, I have collected a value of noticing’s per minute (NPM’s) for that sense-base.

It is interesting to discover which sense-bases give more ability to notice distraction. My hypothesis was that concentrating on vision, the most evolved sense, would allow me to note more distractions. Focusing on touch would make it easier to fall into long stretches of thought and hence accumulate less noticing’s per minute.

The table shows (10 minute session) thought noticing rates (per 100 sessions) for various objects of awareness ranked by amount of neurons devoted to that sense in humans. The percentage is how much of the cortex it takes up.

A low NPM usually indicates bad ability to notice distraction – one is taken in by trains of thought and takes a long time to get off through the final act of noticing. However, expert meditators also have low NPM but for a very different reason – their mind is genuinely clear and focused; they are simply not having many thoughts. Somewhat paradoxically, one must fall prey to distraction, and yet be focused enough to notice that distraction in order to accumulate a high NPM.

I had expected a linear correlation. But a linear model is not appropriate. My prediction doesn’t bear out. More data is needed. 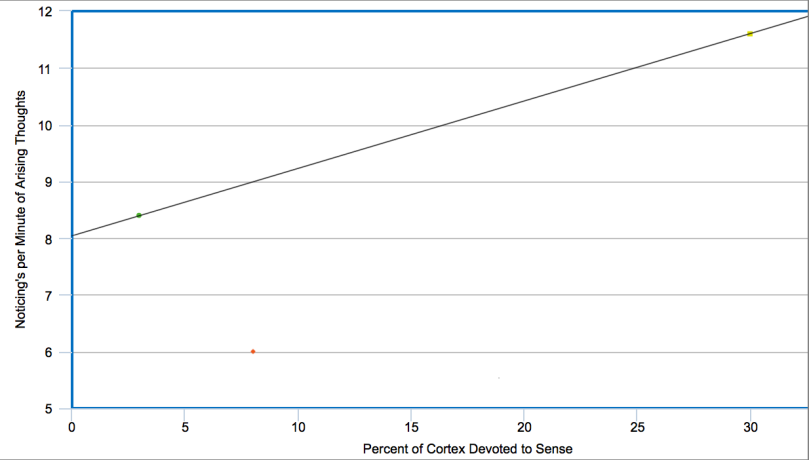 But the experiment is already wildly inappropriate as it is: so many variables not controlled for, and whatever. The last thing we need is to follow our imbecile teachers’ advice and “connect the first and last point.”